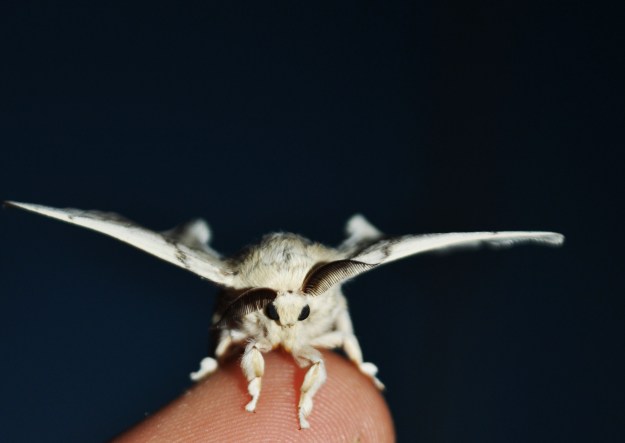 Joanna Rose Tidey is a visual artist who works primarily with living organisms. Fascinated by science and human’s interaction with the natural world.

Tidey questions the consequences and implications of domestication upon these organisms. In her first solo show ‘Dream Weavers’ at Whitchurch Silk Mill, Tidey will be showcasing new and existing installations which discuss the sacrifice placed upon the silkworm for mankind. All silkworms and moths used in Tidey’s installations and sculptures are lovingly and ethically hatched and reared by the artist in her studio in Southampton. All the silkworms get to live out their full life cycle, giving the audience an appearance of seeing the silkworms’ magnificence in its entirety.

With Thanks to Classic Doves (Classic Doves provide a full white dove release service for weddings, funerals and other events in the Hampshire area)  for donating the beautiful white dove feathers for my work in this show! 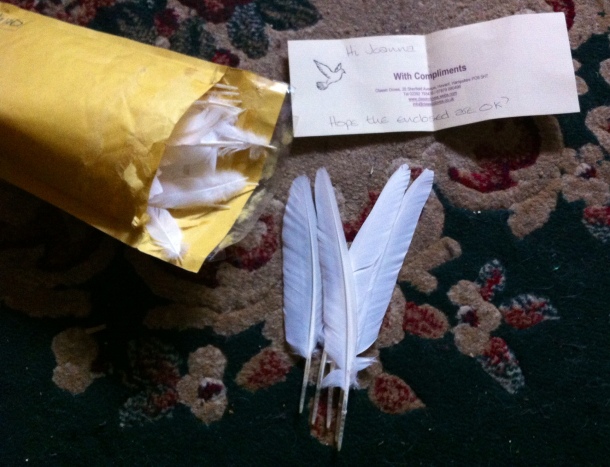 Giant Cocoon made from 200 cocoons spun by 200 silkworms hand reared by myself.

All the silk produced are from free range worms/moths- meaning that they were all able to emerge from their cocoons before I prepared their silk.

In making this work I underwent a similar process to that of the worms, which I reared.  Once all the moths had emerged, I de-gummed and spun into thread before spinning my cocoon using PVA as a Gum- the silkworms sericin.

This piece is a reflection on the way we manipulate the natural world around us for our own personal gain.  Silk being what China built its empire on, domesticating animals and insects for mankind’s financial gain.

The silkworm’s temporary home then in turns helps us to build our own.

Flat Spun Silk, Bamboo and Dove Feathers from Classic Doves as a symbol of peace

This Giant Dream Catcher is made up from 4 smaller silk Flats and one larger silk flat.

The silkworms have spun flat directly onto a card disc until they pupate.  The silkworms still emerge as moths and are not hurt in this process.

This leaves the silkworm very vulnerable in it unconscious state, leaving me as its protector during its deep sleep/ metamorphosis. 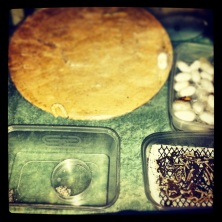 silkworms, cocoons and pupae without a cocoon and structure for the worms to spin flat 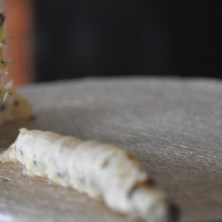 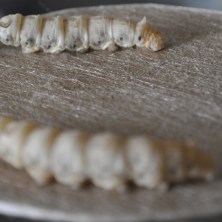 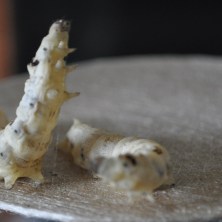 process of the worms spinning flat 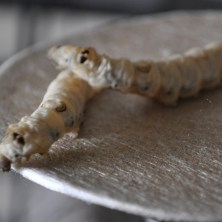 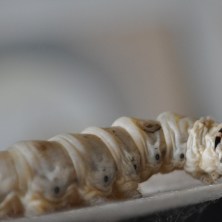 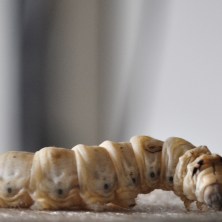 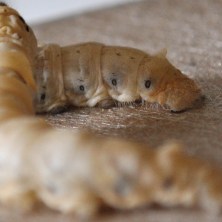 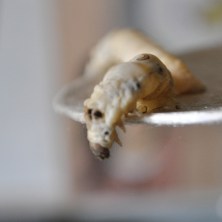 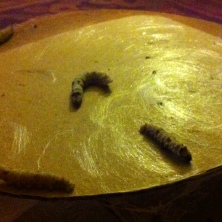 worms creating the silk flat for the catcher 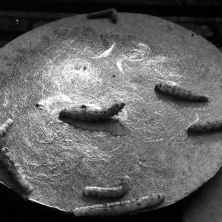 worms in the process of spinning flat 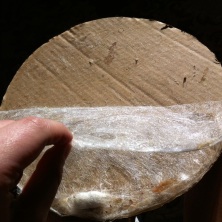 Peeling off the silk flat 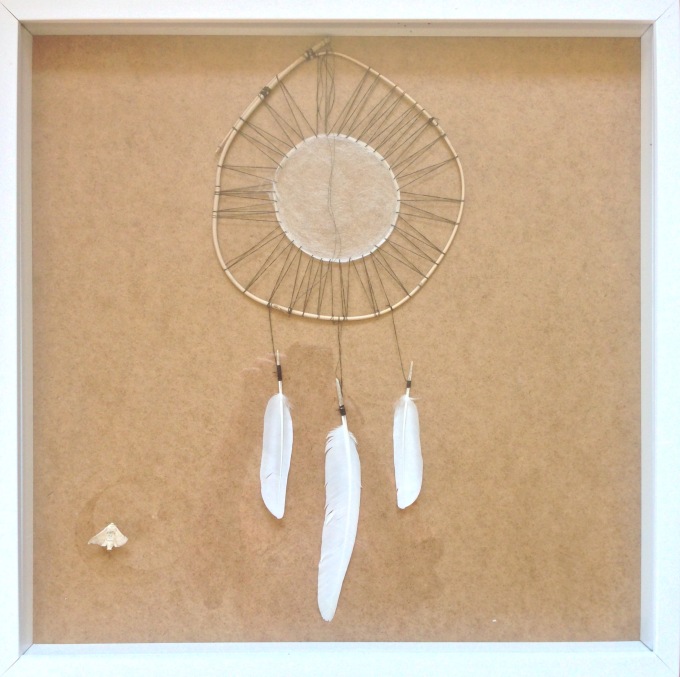 This work refers to Immolation (sacrificing) of the silkworm for man kind in this case the silkworms safety in its deep sleep unconscious state for our own safety in our unconscious state. All the silkworms were safely cared for by me whilst the silkworm was going through its metamorphosis  and reached adulthood moth stage.  However in the silk industry, the silkworms are raised by women like children and forced to cut the silkworms life short like a forced abortion they are killed in its little protective gestation womb like cocoon for the sake of humans financial gain and security.

This piece is Titled Dream Weavers  It was made by unwinding and re winding the silk from 30 cocoons onto a hand made bamboo structure.

Silkworms, the weavers of dreams and protectors of nightmares.  Silk being the strongest natural fibers used to protect the silkworm at its most vulnerable state, given up for the protection of humans in their vulnerable state of sleep.

‘Dream Catcher Law:Native Americans believe that the night air is filled with dreams both good and bad. The dream catcher when hung over or near your bed swinging freely in the air, catches the dreams as they flow by. The good dreams know how to pass through the dream catcher, slipping through the outer holes and slide down the soft feathers so gently that many times the sleeper does not know that he/she is dreaming. The bad dreams not knowing the way get tangled in the dream catcher and perish with the first light of the new day.’ (http://www.dream-catchers.org/)

I have decided to use peacock feathers in this giant dream catcher because although some people may find them unlucky.  I feel they resemble very much the Turkish evil eye, used as a protection in homes to warm away evil.  Also in many cultures the peacock was seen as a protector:

In the western world, the peacock was referred to as a slayer of serpents. The shimmering colors of his tail feathers were explained by his supposed ability to transform snake venom into solar iridescence.

Early belief held that the Gates of Paradise are guarded by a pair of peacocks.

The peacock is a very important bird for people in India. It still has a status of a worshiped bird, mainly because it slays snakes. Because it is believed that peacocks are immune to snake bites, their blood is supposed to be able to chase away evil spirits. Peacock feather tattoo can be a symbol of protection against those spirits, or simply people who would like to hurt you.

This piece was made using silk cocoon strippings, the loos silk around the cocoons- a by product

This comes in a wool like consistence which has high percentage of sericin- the silkworms spit, natural glue.  I arranged the silk, sprayed with water and then ironed over the silk which laid in between grease proof paper.  This re sets the silk using the sericin.

For this piece i have made a bamboo structure for silkworms to spin in for the duration of the show.  During the show i will be placing silkworms in the structure to spin their cocoons so by the end the piece is finalised.

Domestication to “DOM” (abbr. to God) of a life for production value- like that of the silkworm sweat shop workers.

DOM explores  the way in which we try to control the natural world around us for both work and pleasure.  Many people are removed from the origins of objects we use every day, so caught up in our own existence that we do not see past our own needs.

Silk is a primary example of this, entwined with economy and jealousy, domestication and complete reliance on mankind.

A silk tie is made by 110 little lives who in the silk industry meet their fate in a oven before thy get the chance for their big reveal as moths and to carry on their life cycle.

These insects were hybrid from the wild silk moth- however this breed (Bombyx Mori) are unable to live outside of man made conditions.  They cannot fly and have no immune system.  They are completely dependent on the hand of mankind for survival.